This year Interreg celebrates its thirtieth birthday, focusing on three thematic of interest for the European cohesion: youth, a greener Europe and we all have neighbours. In this context, each month, we present one of our emblematic projects related to one of these thematic.

This month, we present you EPyRIS, a project that provides a consensual management strategy for fire management. 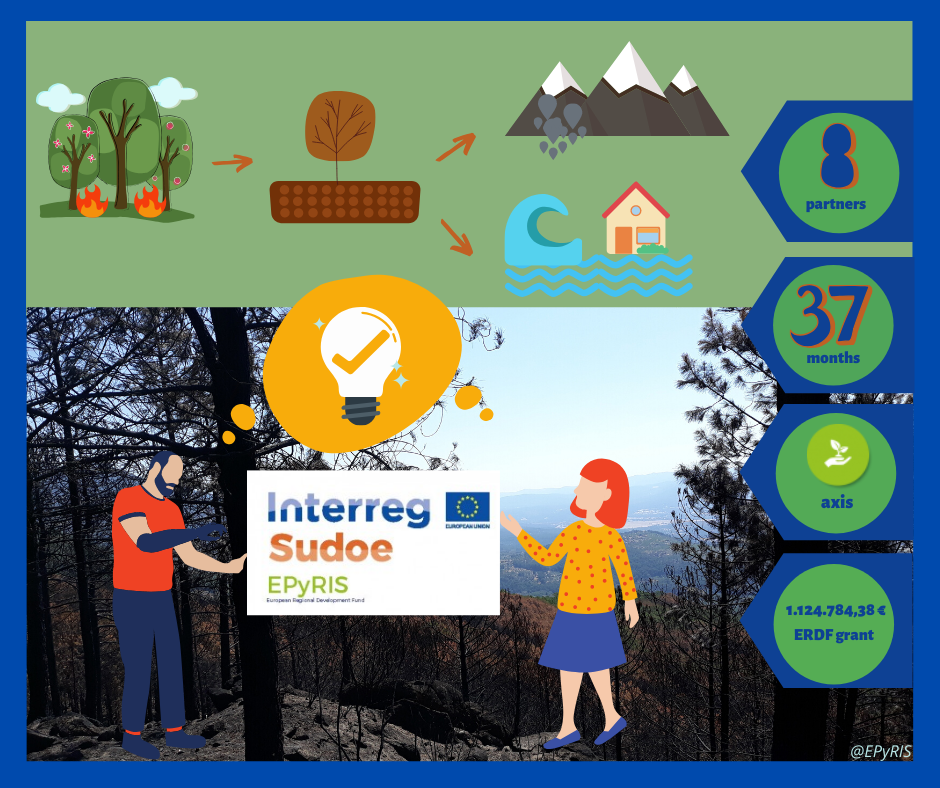 The EPyRIS project aims to respond to the environmental and public safety risks that appear after the occurrence of large fires, in the burned areas or their areas of influence. It is frequent that in forest fires of large dimensions with high intensities other risks occur in addition to direct damages such as the loss of vegetation cover and the effect on wildlife due to the loss of some individuals and the ecosystem. If these are not attended to urgently, they can cause serious consequences for both the environment and people. EPyRIS seeks to create instruments that combine the experience of experts in the scientific field and environmental actions, which facilitate effective responses by the competent administrations.

One of the main direct consequences of forest fires is soil damage, which affects soil structure and exposes soil in highly unstable conditions. This instability, associated with steep slopes and episodes of rain during the first months after the fire, can generate the movement of large amounts of soil. The soil ends up being washed away by rivers and streams and causes great damage in their path breakdown of infrastructure roads and tracks such as gutters, waterways and roads, terrified of water reservoirs and reservoirs of different purposes, and even direct damage to production such as shellfish farming, among others. For instance, in Spain the damage caused to shellfish banks of clams and cockles in Rías Bajas, after the wave of fires that occurred in 2006, amounted to several hundred thousand euros, affecting more than a thousand families. Since then, the affection to the shellfish banks in Pontevedra has been an aspect that has not been taken eyes off after the occurrence of fires with possible effects.

In Europe, forest fires are a common problem in the countries of the Mediterranean environment, where features related to the use and coverage of land and climate are shared. In South-West Europe, this problem is shared and important resources are allocated both for extinction, for restoration and prevention, and for research.

In the case of EPyRIS, having this transnationality has allowed a better understanding of the problem and the concerns raised in South-West Europe, as well as the design of common tools, with the knowledge of top-level scientists, combined with agencies with responsibilities managers capable of applying it in solving real problems.

It is a complex project and quite ambitious, so we try to keep the contact between the partners always very close. Regarding the structure, it was proposed based on an initial review of the resources available in the three countries with respect to the different resources necessary to generate management tools, such as models, sources of information, etc. regarding risks on vegetation, soil and socio-economic aspects. In a second block, we can focus on the use of very fast and precise technologies to obtain pre-diagnoses and early diagnoses after the fires, using satellite imagery, which give a great idea of the damage suffered by vegetation. After, we focus on an extended diagnosis, which tries to use the previous one to design highly effective and targeted field sampling, so as to minimize the resources and time necessary for a detailed situation assessment. Finally, evaluations of priorities for action and recommended techniques will be incorporated.

On the one hand, it is expected to achieve an important documentary base on the casuistry of managing emergency actions after forest fires that will facilitate communication and understanding between managers of different public administrations with competences at different levels. This provides a common criterion to support the decision-making that they have to assume in the weeks following the occurrence of major fires. In addition, it is planned to provide this strategy with tools that facilitate its implementation, through computer tools for a useful diagnosis at two levels: early and operational level.

The tools that EPyRIS provides are, in any case, valid for other territories and the usefulness of the project's products is expected to go beyond the borders of South-West Europe. An example of this, it is our collaboration with the Government of the Canary Islands as Associate Partner, a collaboration that has allowed the project to incorporate its experiences in the development of utilities for the management of burned forests at its starting point.

Forest fires are a phenomenon to which public opinion is highly sensitive, especially in terms of what it entails in terms of citizen security and civil protection. However, fires are part of a complex reality that has a lot to do with the management of natural resources and territory in rural areas, and with the people who inhabit them. EPyRIS focuses on a very specific but very necessary part of the management after the occurrence of certain fires. It includes the post-fire management of the territory, where prevention, extinction and restoration are a component more necessarily linked to the rest of the policies.

Interreg provides the project development framework, facilitating the fundamental part of the resources for its development, as well as utility in the interaction with other complementary project consortiums, as in our case, the OPEN2PRESERVE project more focused on prevention, and also very strongly linked to the management of the territory. Finally, it offers a space for communication. 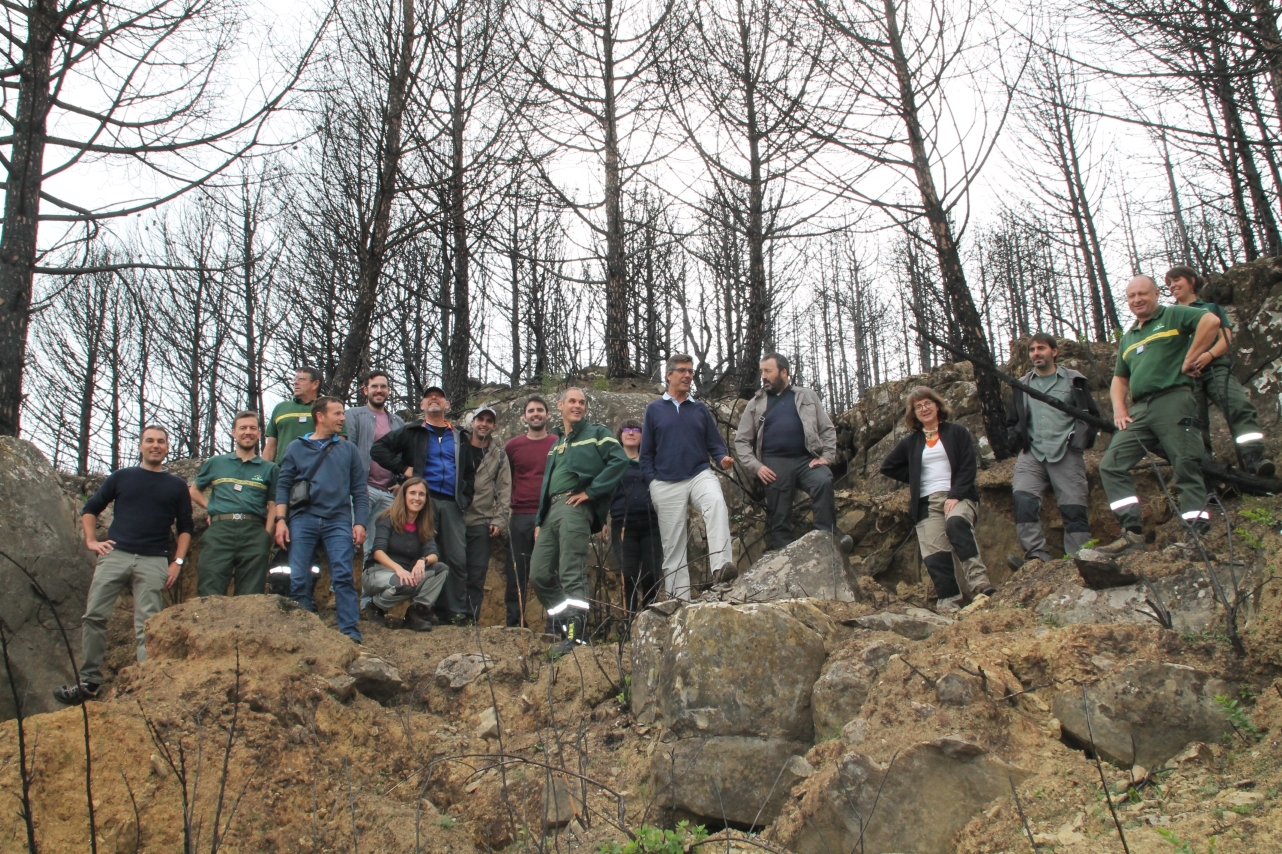 In addition, if you want to know more about the EPyRIS project, we are waiting for you on our website.