The official text of the third call for proposals published on 5th June 2018 announces the launch of this call  for three priority axes, with € 22.900.000 ERDF budget as it follows: 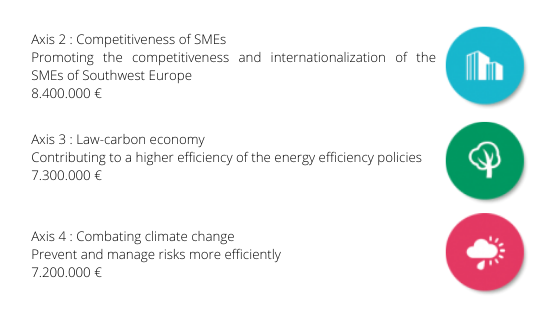 You can download the official text of the call for proposal in French, Portuguese and Spanish.

Private and public entities, with or without profitmaking aims, as well as companies (except big companies), located in the eligible area of Sudoe Programme.

IMPORTANT: the official text of the call for proposals provides details on the type of actors who must be part of the application regarding each priority axis.

The Call for Proposals is organised in two stages.

Step 1, published on 5th June 2018 and opened from the 1st to 21st September 2018, both included. The applications have been built by the National Authorities and the Joint Secretariat being subject of a first selection by the Steering Committee according to the admissibility and selection criteria of the first phase, as detailed in the factsheet nº6 of the Sudoe Programme Manual. At the closure, the Joint Secretariat received 127 project proposals. The list of shortlisted projects was published on the 18th January 2018, after the decision of the Steering Committee, that met on the 18th of January in Toulouse (France).

In order to support the beneficiaries of the third call's approved projects, the National Authorities and the Joint Secretariat have organized several information sessions.

The National Authority organized a seminar in Madrid on January 23th, 2020. Spanish beneficiaries are invited to attend as well as their first level controller if necessary.

The National Authority and the Joint Secretariat organized a webinar on January 10, 2020. The video is available here.

The presentations presented can be downloaded here.

The documentation to be presented by French beneficiaries for their first level controller's proposal to the National Authority can be downloaded here.

The National Authority and the Joint Secretariat organized a webinar on January 13, 2020. The video is available here.

Presentations can be downloaded here.

Documentation to be presented by Portuguese beneficiaries for their first level controller's proposal to the National Authority can be downloaded here.